$70,000 raised for phase one of project to honor veterans in New Washington

NEW WASHINGTON, OHIO – Tuesday, August 16, 2022 – New Washington Village Council has unanimously approved a rendering of a mural highlighting veterans to be located on the north side of the New Washington Library. The mural, slated to start September 12, is phase one of a project created to honor local veterans and highlight each branch of the United States Military. 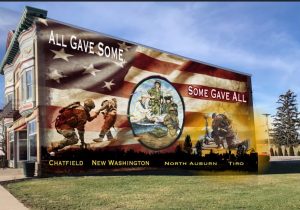 Dave Riedel, a Marine Corps veteran, and New Washington native, has led the project since developing the concept for the project in early 2022. “I was so blown away by the veteran’s park in Attica, that I knew I wanted to do something similar in New Washington to honor our local men and women who have so bravely served our country.”

The park, which will be apply named the New Washington Veterans Memorial Park and boast the theme: Remember, Honor, and Teach, will be located on the corner of Main Street and Kibler Street/S.R. 103 and completed in two phases. The first phase, the veteran’s mural, will be completed by artist Dean Davis out of Whitehouse, and weather permitting, and be completed within a month. The second phase of the project will include monuments honoring the different branches of the United States Government, first responders, prisoners of war, and will have informational plaques throughout the park.

Mayor Ben Lash noted; “Honoring our service men and women, while simultaneously creating a more vibrant downtown New Washington is an incredible opportunity for our community, and we’re so grateful to everyone who has come together to make this vision a reality.”

Felty-Heinlen Architects and Planners, Inc. have been secured as the architect for the project and have finalized renderings and New Washington-based Studer-Obringer has been slated as the general contractor. To date, the project has raised nearly $70,000 from local donors, and has an established a fund for ongoing giving opportunities at the Community Foundation for Crawford County under the “New Washington Veteran’s Memorial Fund” and is still working to raise the estimated remaining $100,000 needed to complete the park. No timeline has been established for completion of phase two. To stay up to date on the park’s progress visit the park’s Facebook page “New Washington Veterans Memorial Park.”

About the Crawford Partnership

Started in 2006, the Crawford Partnership for Education and Economic Development is a private, non-profit corporation dedicated to driving collaborative economic, community and workforce development in Bucyrus, Galion, Crestline, New Washington, and all of Crawford County, Ohio. Twice in the last four years, the community has been nationally ranked in the top 20% for economic development and is pursuing an aggressive, strategic, and comprehensive agenda to become a community of choice for business and residents. To learn more about the Crawford Partnership, please visit us at crawfordpartnership.org